This past weekend was pretty bright for me. I love weekends. In the school year, they're my chance to relax and get ready to push through another week. In the summer, it's time with my family members who work during the week. This weekend, there were a few people who really stood out as sunflowers to me.

1. Random Downtown Library Guy:
Probably about a month ago, my family had the joy of having our dear friend Kez stay with us for a week. It was a great week. While she was here, we took her to the downtown library and checked out lots of cookbooks so that we could make food from different countries. This Saturday, my sister and I drove back to the library to return them. I hopped out of the car and carried the heavy books over to the return. They were so big that I had to turn them in one by one. When I finally finished I began to walk back to the car. That's when I met Random Downtown Library Guy. He asked me what I was studying since my books were so big. When I told him they were cookbooks he said, "I love cooking, it adds spice to life!" I smiled, agreed, and climbed into the car. My sister thought he was creepy and he may have been, but his random friendliness brightened my day just the same.

2. My best friend, Elise:
This Saturday, one of my very best friends, Elise, got to go see Taylor Swift live in Ohio with tickets from her generous uncle. She knew how badly I had wanted to go. I'm pretty sure I know all the lyrics to every Taylor Swift song. I consider Taylor like my best friend who I just haven't met yet. Well anyway, Elise, knowing that I desperately had wanted to be there, called me during the concert just so that I could hear and sing along to the live songs. It was incredibly sweet of her and it definitely made my night.


Thank you, Elise.
3. My very own Momma:
On Sunday, I was attempting to take an afternoon nap on the couch while my sister watched a TV show on the nearby chair. In the show, they mentioned something about going to Indianapolis and eating at a restaurant. It reminded me of when my family went to Indianapolis this spring and ate at The Old Spaghetti Factory. Images of my angel hair pasta covered in browned butter sauce and sprinkled with Myzithera cheese danced in my head. I could almost taste it. Suddenly, it was the only thing on my mind. I was craving it like a pregnant woman craves pickles. My dear mother had compassion on me and my stomach. Out of the kindness of her heart she found the recipe online and made it for me and the family.

Rule of Life #3 : Bagels Are Forever

This winter some of my lovely friends and I derived the Rules of Life. They were very good rules. From them I learned many important life lessons such as: Do not do anything unless it will be really awesome or really dumb (for example: making oatmeal raisin cookies, which don't fall into either category). I think rule number 3, which states that bagels are forever, may have been on my mind last night while I worked on my writing at Panera Bread.

I stared up the sign from my table: I could get one bagel for only one dollar and nine cents.It seemed too good to be true, I could buy myself a bagel and eat it for my breakfast the next day. No one would question my having it since I bought it with my own money, and it would be all mine. But then I stopped. My family would want bagels, too and I could get them some. In fact, it would be cheaper to buy them in bulk.

So I bought a half dozen and carried them away proudly in my brown paper bag. When I arrived home, I wrote a little note for the family and put it on the bag. This morning, I arranged them on a clean, white plate and set them out for family members to take as they pleased. It felt great to do something so simple, but yet nice for them. 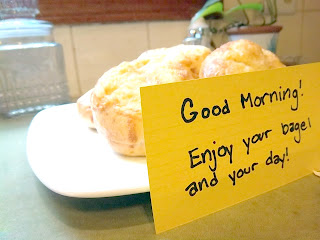 P.S. I forgot to mention that the wisdom about all things awesome and dumb came from no other than Yammie of Yammie's Noshery. You should check out her blog.
Posted by Hannah Ruth at 6:17 PM No comments:

Well, as we can see from my week long lack of posts, I am a terrible blogger. I'm bad at this sunflower thing too. It's hard to keep reminding myself to put others first.

Today I just did something simple that most people probably do everyday. I made lunch for my brother and then washed all the dishes I could find in the kitchen without being asked. It's not much, but hopefully the clean kitchen made my mother happier.

I want to brighten someone's day in a bigger way though. I want to tell some of the amazing people in my life how much they mean to me. Does anyone have any ideas? Little handwritten notes, phone calls, face to face conversations? I'll work on these ideas and post them on here soon.

P.S. I forgot to mention: you, the person reading my blog at this very moment, are an amazing person. Thank you for not completely losing hope in me in my absence.

Posted by Hannah Ruth at 4:11 PM No comments:

One of the many wonderful sunflowers in my life is my Grandma Violet. She always brings brightness to my day with her genuine smile and beautiful personality. She is one of the few people in my life who I've never, ever heard complain. I love her.

When I was younger, my Grandma and Grandpa lived far away and I didn't get to see them much. After my Grandpa died in Christ and my Grandma's health began to decline, we decided to move her closer to our family. It has been great to have her living in a retirement home just down the street. Seeing her often brings brightness into my life that is indescribable.

Recently, she has been suffering from Alzheimer's Disease on top of her many other ailments. My dad finds the time to visit her every day at the same time. I've been wanting to go with him to see her lately. Hearing about her confusion breaks my heart. Today, I visited her with him.

Despite her ailments and confusion, she seemed genuinely happy to see me. I loved to tell her about my summer. I loved to see her smile and laugh. It was wonderful to visit her and even though I was trying to brighten her day, she ended up brightening mine.


I love you, Grandma.

-Hannah Ruth
Posted by Hannah Ruth at 5:37 PM No comments:

When I started this blog a few days ago, one of my goals was to start being more positive. I absolutely adore positive people, they are definitely sunflowers.

Today, I've been trying spontaneous compliments to strangers. At the store just a few minutes ago I had been admiring the fishtail braid of the girl who bagged my groceries. I'm terrible at fishtail braiding my hair myself, so I have huge respect for anyone with the patience to beautifully twist their hair into nautical fashion. I thanked her for bagging my groceries and then decided that this was the perfect opportunity to compliment a stranger. I knew I'd never see her again if she thought I was creepy, but a little admiration can always brighten someone's day. As we walked away I told her that I loved her braid. Her smile was priceless, even after just a tiny compliment. It may just have brightened my day more than hers.
I also decided to try another form of positivity today. One of my dear friends, Amanda, recently inspired me to try this one. She is amazingly talented in giving back rubs, and she gives them out of the kindness of her heart without anyone asking. Tonight I decided to imitate her by randomly giving back rubs to my unsuspecting family members. They loved it, and I loved making them happy. Thank you for the lovely idea Amanda.

-Hannah Ruth
Posted by Hannah Ruth at 10:36 PM No comments:

One thing that absolutely always brightens my day is receiving snail mail. I love crisp, fresh letters sitting in my mail box. Reading words written out by the hands of someone you love is a wonderful feeling. I pour over the letters I receive in minutes, but save them for years.

My mission today was to write a couple old fashioned-letters. I love thinking that when someone reads my letter, they might get the same feeling I get when I read the letters I recieve. I wrote on clean cream colored paper with no lines in sight. I wrote out the thoughts I really wanted my friends to know, then signed each letter sloppily and added my best attempt at a drawing of a sunflower in the corner.

The letters are sealed up in envelopes right now, under the shelter of flagged mail box. Stamps and addresses will help them to get to their owners. I hope that they can brighten a couple days once they arrive. 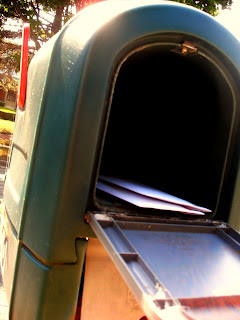 -Hannah Ruth
Posted by Hannah Ruth at 4:45 PM No comments:

Everyone falls apart sometimes. Everyone you see is probably struggling with something. It could be a job, a friend, a family member, a condition. I struggle with remembering this every day. I like to think that I'm the only one who suffers pain when in reality I have a pretty easy life. Every time I struggle or even fall, God sends wonderful people into my life to help me out of it. I think of these people as sunflowers.

Sunflowers are wonderful flowers. They always face the sun and look happy. They're optimistic, bright, and beautiful. People who are like sunflowers are the same way. They always find the happiness in situations. My day brightens each time I see them.
One of my latest goals for life is to be a sunflower. I want to let the people I love know how much I care. I want to bring people the happiness that has been given to me.
This blog will be a chronicle of my adventures as a sunflower. I'll post new sunflowering (yes, I know it's not a word)  ideas, I'll share with you some of the wonderful sunflowers who inspire me, and I intend to give a semi-daily report of life as a sunflower.
-Hannah Ruth
Posted by Hannah Ruth at 4:06 PM 1 comment:

I adore sunflowers. Whenever I see a sunflower it brightens my day a little. This blog is a chronicle of the little day brightening things I'd like to do: heartfelt compliments, little friendly notes, or just letting someone know how much I care. My goal is to brighten someone's life everyday. I want to be a sunflower.

Don't Forget Where You Came From

Hannah Ruth
I'm Hannah. I love my family. I love to sing, write, read, drink tea, and wear socks. I want to be a sunflower.